The first lesson covered the rough sketch, finished drawing, and transferring the drawing to the panel. In this lesson we will begin the under painting.

All this painting was done with the panel flat on the work table. This allows better control of the washes and other methods I used throughout the painting. I generally use one brush for the entire painting. I prefer a Loew-Cornell 720 Ultra Round, #12. The washes for the rear wall, beams and ears of corn were done with this brush. To begin the painting I used Ouinacridone Red-orange for the background wall, a thin wash of Permanent Blue Light for the beams, and Burnt Sienna for the cast shadows. These are rather thin washes with some of the white ground showing through.

A wash of Prussian Blue was used on the six sections of wall. I did one section at a time by applying the wash and leaving some of the Ouinacridone Red-orange showing through. Right after the Prussian Blue wash was applied, and before it gets too dry, I use my fingertips to flick drops of soapy water onto the damp blue in a random pattern. I wait until the soapy water softens the damp blue, then I blot the section with paper towels to remove some of the blue. I then dry the surface with a hair drier to speed things up.

To under paint the corn, I used a thin wash of the contrasting color of the finished corn. Violet for the yellow corn. Hookers Green for the red corn, and permanent Blue Light for the orange corn. I indicate some of the cast shadows at this time by using a stronger wash of color. The final colors of the corn and the positions of the corn changed slightly as I made adjustments throughout the process. At this point, I started the color map for the painting as described in the first lesson. 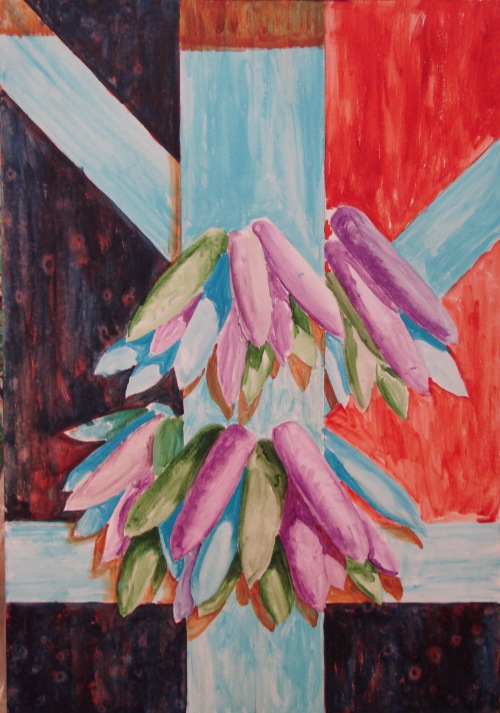 Using the same brush, I added a second wash of Prussian Blue over the wall and flicked more soapy water on the surface, then blotted some off before it dried. I put a wash of Burnt Sienna over all of the posts and beams, and did the soapy water-blotting method on these. This was followed by applying some indication of wood grain with thin Prussian Blue. I added some floor joists behind the beams at the top of the painting. This gives some depth to the picture and served as the reason for the cast shadow at the top of the beam and on the wall. 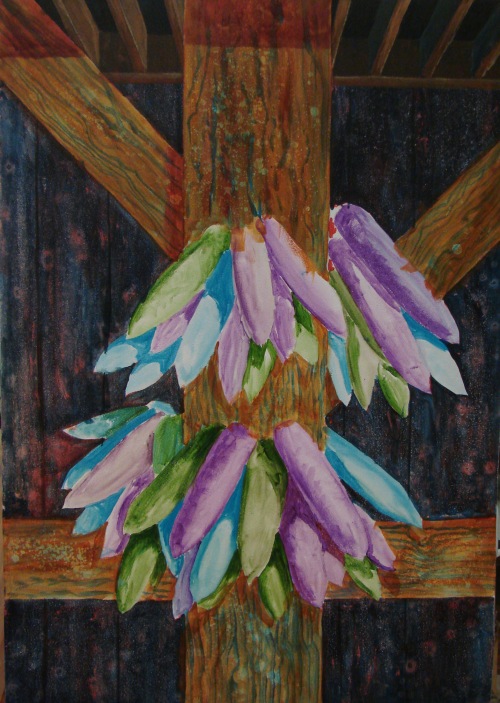 I began adding wood grain on the lower half of the wall using thin lines of Yellow Ocher, Burnt Sienna, Raw Sienna and a little white. I went over the grain of the wood several times, adding swirls and knots in a random pattern. I placed some gaps between the boards using Prussian Blue, Hookers Green Deep and Ouinacridone Red-orange (I never use black or Payne’s Gray). I didn’t paint wood grain on the top section of the wall.

I considered the back wall, floor joist and beams as “supporting actors” in the image I’m trying to create. I save the finer, detailed work for the “star” of the show, the corn. I consider all this work thus far as under painting. Using opposite colors, thin washes, wetting damp paint and blotting are some of the methods I use. The hair dryer speeds up the drying process and using rags, paper towels, and crumpled aluminum foil can create an interesting effect in any painting.

I added the white wash and some details to the beams, experimenting with the lower part of the post first. I used White, Burnt Umber and a touch of Hookers Green Deep to make a soft, dull grey. I used the side of the brush to apply this mixture. I loaded the brush with moderately dry paint, held the brush almost parallel with the surface, and dragged the paint over the surface of the posts. The tiny peaks formed by the rolled geso pick off the paint from the brush.  I also rotate the brush slightly to expose more paint to the surface. As soon as I apply the paint to one area, I splatter it with soapy water and daub the damp paint with a paper towel. The left, horizontal rail has one thin coat of White with some broken color. The top left and center post has two applications of paint and daubing and the bottom of the post has some cracks, wood grain and worm holes added. 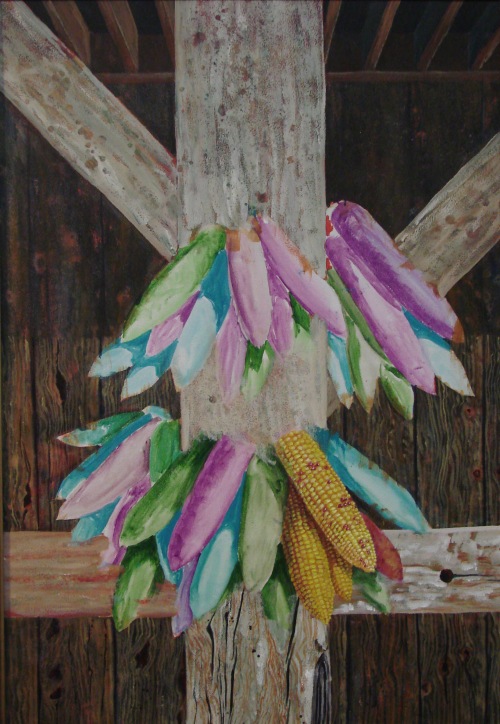 I started experimenting by painting the kernels on a couple of ears. In the next lesson I explain how I used a Grumbacher #2 Round Liner brush to apply between five and ten coats of thin paint to each kernel of corn.

Next lesson: Laying out the rows of kernels, building the illusion of domed kernels, highlights and cast shadows.

I have begun a series of five, weekly semi-private acrylic workshops for experienced artists currently using acrylics or any other painting medium.  The workshops will be held once a week in my studio in Windham, NH.

For those folks new to acrylics, the workshops will provide hands-on experience on how to work with this fast drying, versatile medium. Experienced acrylic artists will learn new methods and approaches to get the most from this wonderful paint.  I will share with you all of the painting processes and methods I have developed over 30 years of painting.

Click on the Acrylic Workshops tab on this site for a list of what’s covered in the workshop, and a list of materials needed for the class. If you are interested in taking the five week workshop, e-mail me at www.donsfineart@comcast.net or call at 603-890-6883.  There are currently two openings in the April workshop and I am accepting reservations for additional workshops.

Prerequisites
Each student must have two to three years of painting experience, a basic knowledge of drawing, composition, color theory; and a willingness to try something different and out of their comfort zone in the creative arts.

Objectives
Each workshop will focus on specific methods to get the most from this versatile medium. The workshops are best taken in order, as each workshop will build on the lessons of the previous workshop. There will be homework assignments at the end of some sessions.  These completed assignments will be needed for the following session. 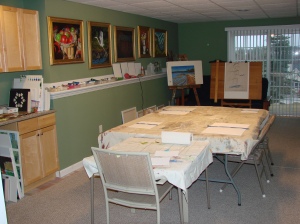 I just put the instructions and photos of how I prepare Masonite panels for painting. There are two parts to this process. The first produces a surface with thousands of tiny peaks and depressions; the second step takes this a little further and produces a velvety smooth surface with microscopic pits that is great for washes and scumbles. This all looks and sounds like a lot of surface preparation, but believe me; it’s great to paint on.

The canvas preparation steps will be coming in a week or two.

Posted in Tools and Methods